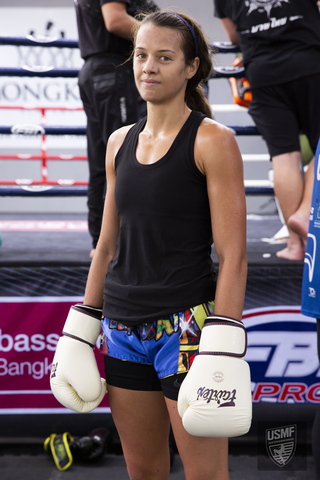 Photo: Jeff Dojillo for the USMF

Coral Carnicella is an 9x amateur MuayThai champion from Loxahatchee, Florida. She recently competed with team USA at the IFMA World Championships this past July in Bangkok, Thailand. She took home the silver medal in the 54kg (119lb) A-Class division. Now she is gearing up for the South American Championships in Medellin, Colombia that will take place on December 13th-17th. I got a chance to sit down with her and discuss her recent accomplishment as well as her decision to compete in Colombia. 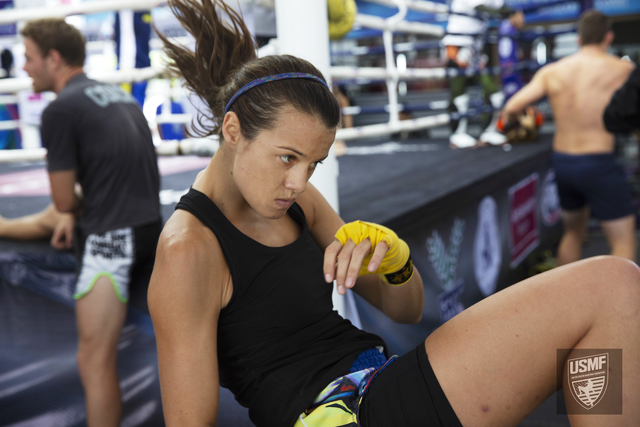 Photo: Jeff Dojillo for the USMF

“Winning the silver medal was bittersweet for me.” Says Carnicella, who lost a close fight in the finals to Russia’s Almira Tunchirina. “I wanted to enter the A-class division, which I knew was full of pro fighters, because I wanted to test myself and fight the best.” Even though she didn’t take home the gold she still made an impression on everyone defeating Thailand’s Chommanee Sor Taehiran in the semi-finals. “Fighting Chommanee was so nerve-racking for me. I knew how skilled and dangerous she was and when I got my hand raised, I felt I had already won the gold.” This was also the young athlete’s first time in Thailand and experiencing real MuayThai up close. “I loved competing in Thailand. It felt so good to be surrounded by people who take this as seriously as I do, and the people and culture were so welcoming. My favorite part besides fighting there was going to the 6 story malls and bargaining for goods!” 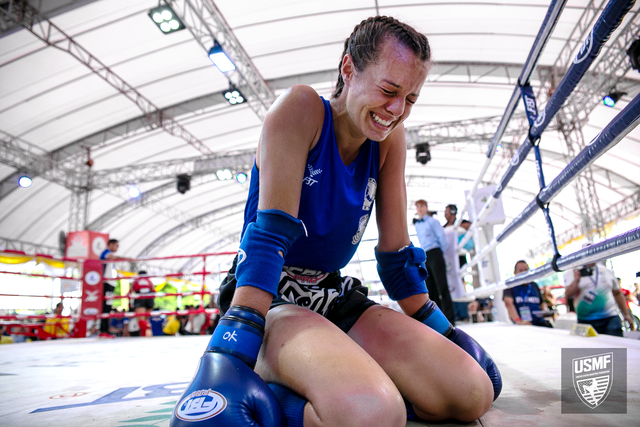 Photo: Pari Aryafar for the USMF

Having a very successful run in her first time at an IFMA tournament Coral was excited and ready to get back on team USA and compete for her country yet again. Her decision came quickly when she was asked to be a part of the South American Championships team. “I feel like Thailand was such an experience for me and I really enjoyed working with the USMF and being a part of team USA. So, when they asked me to compete in Colombia I didn’t hesitate to say yes!” Her goal is to get back on the podium with a gold medal around her neck, but her main focus is to keep competing internationally at this elite level. 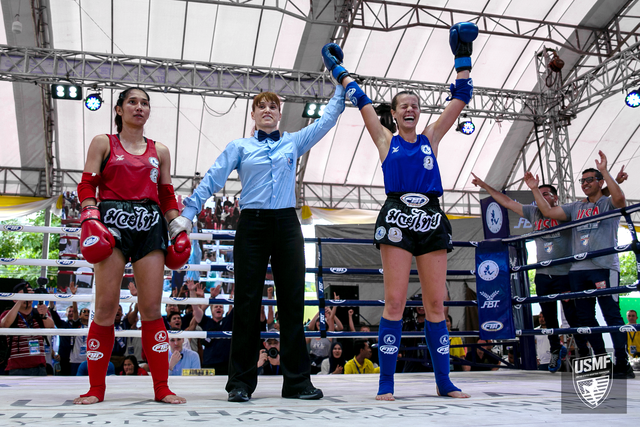 Photo: Pari Aryafar for the USMF

Training full time and competing internationally isn’t cheap or without sacrifice. Her parents are her biggest support and her father, Jim Carnicella, is always in her corner. “I am so proud of her! I couldn’t be prouder.” Jim tells me. “As a father I’ve always wanted my kids to do something positive with their lives and since Coral has found Muay Thai she continues to overcome so many challenges as well as her fears. I love that she found something she loves and being able to watch her overcome challenge after challenge makes it all worth it.” He too will pack up his bags and head to South America with his daughter this December. Going in to another high level Muay Thai environment I asked Coral what her biggest lesson from Thailand was and why she wants to compete again. “I learned that I am capable of competing with and beating the best in the world. As well as learning to trust myself more in the ring. I wanted another opportunity to win the gold and Colombia came up at the perfect time.”

She will join 7 other Americans alongside 2 of USA’s top coaches for the 3-day tournament. Together they will continue to put USA on the Muay Thai map and grow the sport as a whole.

Written by Tavia Roman.
"I'm a 26 year old aspiring journalist/broadcaster who has a passion for sharing athletes stories."