USMF, as the sole United States IFMA representative, has the responsibility to promote Muaythai to the highest recognition in the U.S. The USMF is presided by  Michael Chase Corley and overseen by a board of trusted Muaythai leaders in the community, located across the United States brought together by the passion and ambition to develop and grow the sport of Muaythai in the U.S.

Michael Chase Corley is the owner/head coach for Houston Muaythai and has fought on the highest platforms of Muaythai with over 30 professional fights spanning over eight countries. Michael’s most notable accomplishments are competing in the sports mecca, Lumpinee Stadium in Bangkok and the Toyota Muaythai Marathon Thailand. As a seasoned veteran in the Muaythai community, Michael is the epitome of the American Muaythai fighter having lived in Thailand & competed among the best in the world.  Michael's involvement with USMF started after earning his Bachelor Degree in Sports Management from Texas A&M University in 2007, in 2008  and 2009 he was selected as an athlete and then became a manager of the team in 2010. In 2016 he coached the USMF Team in Sweden and the USMF Pan American Team in Peru. After being elected President in 2016 the USMF brought its first Junior USA Muaythai Team to Bangkok, Thailand for the IFMA Junior World Championships. The team earned a USA record 10 medals: 2 Gold, 2 Silver and 6 Bronze.

Marcy Maxwell has been training in Muaythai for eight years starting at the world-renowned Fairtex Muaythai in San Francisco, California and continuing at Woodenman Muaythai. She also oversees the Event Management for Arise Fighting Championships, the premier fight sports organization in Northern CA.  Marcy manages the Woodenman Fight Team under World Champion, Jongsanan Woodenman and brings her experience in Muaythai and corporate business management to USMF. www.facebook.com/marseemax Twitter: @marsizzle

Kirian Fitzgibbons is the owner and head coach of Combat Sports Academy in Dublin, California.  CSA has become one of the preeminent Muaythai Gyms in North America. Kirian is currently the trainer to American Muaythai World Champions Miriam Nakamoto and Kevin Ross as well as many rising stars.  From 2008-2010, Kirian was selected as the Head Coach of the USMF National Muaythai team. In 2009, he led the US Team to an all-time best performance during the World Championships in Bangkok, Thailand, for a total of seven medals – a record year for USMF. www.facebook.com/CSAGym Twitter: @CSAgym www.csagym.com

Derek Yuen is a coach from the well-known American Kickboxing Academy in San Jose, California. He has been coaching for over 21 years and actively involved in the Muaythai community.  Aside from being an amateur Muaythai Champion and former USMF athlete and coach, Derek oversees multiple tournaments and trains many renowned professional and amateur athletes. Derek brings a wealth of coaching experience and knowledge to USMF. www.facebook.com/derekyuen

Ricardo Perez is the Head Instructor of Team Toro Janjira Muaythai and Co-owner & Promoter of Farang Fight League. He has over twenty years of experience in the art of Muaythai; once as a professional fighter and now as a trainer under the six time world champion, Saekson Janjira. Along with being a successful Muaythai coach and fighter, Ricardo has trained multiple professional Muaythai fighters and produced amateur champions on all levels.  www.facebook.com/ricardoperez www.team-toro.com

Stephen Strotmeyer is the Head Trainer at Kaay Muay Sit-Kangmongkorn in Pittsburg, Pennsylvania. Stephen has over fifteen years of experience as a notable Muaythai fighter holding the titles of WKA US Muaythai Featherweight, WKA US Amateur Kickboxing Lightweight, USKBA Lightweight Amateur Muaythai, Battlegrounds Muaythai Lightweight East Coast, & USMTA Midwest Lightweight Muaythai Champion. Having retired from professional fighting in 2007, he has focused on training and growing the sport of Muaythai on the east coast as a coach and official. www.facebook.com/phaisaan666 www.pittsburghmuaythai.com

One of Thailand’s living legends, Jongsanan is a 2x Lumpinee Champion, ISKA US Welterweight, & IKF North American Welterweight Champion; with over 126 fights in his outstanding Muaythai fight career. Born in Chiayaphum, Thailand, Jongsanan began fighting at the age of eleven under the fighting name, Jongsanan, “The Woodenman” Fairtex.  In 1998, he moved to San Francisco to work for the Fairtex Gym as a trainer and continued to fight until his retirement in 2005. Jongsanan is the founder of Woodenman Muaythai and is currently teaching out of El Nino Training Center, as the standup coach for professional MMA Fighters in the UFC.  www.facebook.com/pages/jongsanan-woodenman-muaythai Twitter: @woodenmanmt www.elninomma.com

Cheryl Garcia has been training Muaythai for eight years starting at Fairtex Mountain View under the Head Instructor, Anh Fairtex.  She also managed the amateur and professional fight team as well as an official and Team Manager for USMF in 2008 – 2012.  In 2013, Cheryl was appointed as President of USMF by founder and former President, Anthony Lin and served until 2016. As President, she represented USMF in Thailand, Russia, Malaysia, & China for SportAccord Combat Games. She is dedicated and committed to growing the sport of Muaythai in the US.

Patrick Rivera serves as Head Coach for the USMF Jr Muaythai National Team as well as a Coach with the USMF Adult Team.   Patrick has traveled and travels regularly throughout Thailand to coach athletes in Bangkok and Chiang Mai. He is also the founder of VALOR Training Center which has two branches in Stockton, California, offering one of the country’s largest and most successful Muaythai only programs with over 500 members.  His athletes have won over 50 titles both Youth as well as Adults.   In addition, his athletes have the most IFMA World Championship medalists in the country:  an unprecedented 10 medals including  5 Gold Medals (4 different athletes), 3 Silver medalist (3 different athletes) and 2 Bronze medalists (2 different athletes). 10 IFMA World Championship Medals total from 10 Athletes.

Thiago Azeredo holds a Bachelor Degree in sports medicine from Arizona State University and has a lifetime of experience in Muay Thai and other forms of Martial Arts. He is the founder, owner, and head trainer of Sitan Gym AZ in Chandler, Arizona. Thiago’s athletes have earned

over 40 Muaythai titles against athletes both within the U.S. border and internationally, and he is the mentor and coach of WBC Pro Muay Thai National champion Travis Clay. Thiago also served as a head coach for Team USA at the 2014 IFMA World Championships in Malaysia. He

Jeff Dojillo is a Los Angeles based artist whose work has been celebrated internationally with a focus on portraiture documentary and sports photography. His award-winning work as been featured in various publications and has earned Honorable Mention from the Lucie Foundation. Since 2010, Jeff has been documenting combat sports in the United States and has been a driving force in building various brands such as Can't Stop Crazy and West Coast Muay Thai (WCMT).  www.dojillo.com

Mark A. Metzger III was born and raised in Houston, Texas. After graduating high school, Mark enlisted in the United States Marine Corps and served as an Electronic Intelligence Analyst (MOS 2631) until his honorable discharge. During his tour in the Marine Corps, Mark worked directly under the National Security Agency and Central Security Service with participation in Operations: Northern/Southern Watch; Enduring Freedom; and Iraqi Freedom.

Upon returning to his native Texas, Mark attended and graduated from Texas A&M University with a Bachelor of Arts in Philosophy. While at Texas A&M, Mark was a linebacker/defensive end for the Aggie football team (#59), studied abroad in Bonn, Germany, and tutored students in Logic and Liberal Arts classes for the Texas A&M Student Athletic Department.  He then came back home to Houston and continued his education at South Texas College of Law.

Mark is also a September 2014 graduate of Gerry Spence's Trial Lawyers College.  Located at Thunderhead Ranch in Dubois, Wyoming, it is considered the most prestigious and selective trial advocacy college in America. To date, Gerry Spence has only graduated just over 1,200 students over the past 20 years.

Outside the courtroom, Mark created and organizes the 22 with 22 for the 22 Silkies Hike in Houston and Galveston,  Texas which is a campaign that provides therapeutic relief to military veterans suffering from suicidal tendencies, depression, and PTSD.  Outside of his Silkies Hike duties, his around the clock charitable work also includes aiding the local homeless to include a local organization that provides relief to at-risk and orphaned youths.  Mark is also an ordained minister and is working on completing his Ph.D. in Theology and Apologetics.

Inside the ring, Mark began training in martial arts at the age of 11. At age 13, he won 1st place in his very first karate tournament in Alvin, Texas. Mark continued his martial arts training throughout high school and during the Marine Corps. During the Marine Corps, Mark began to train in Filipino Martial Arts, namely Kali, which emphasizes weapon-based fighting with sticks, knives, and other bladed weapons. After the Marines, his training evolved to include Silat, which uses speed, leverage and devastating disabling moves designed to damage an opponent. Throughout his mid-20s and early 30s, Mark fought in various Boxing events and at age 37, he is currently training to fight in his first professional MMA match.

USMF was founded by former President and former IFMA Executive Board member, Mr. Anthony Lin.  As a leader in the Muaythai industry, he founded USMF in 2004 and has successfully represented the U.S. competing in Thailand, Korea, China, and Russia. Anthony was the former President and CEO of Fairtex. His countless efforts with USMF have made a valuable contribution by representing the U.S. at the IFMA World Championship Tournaments. 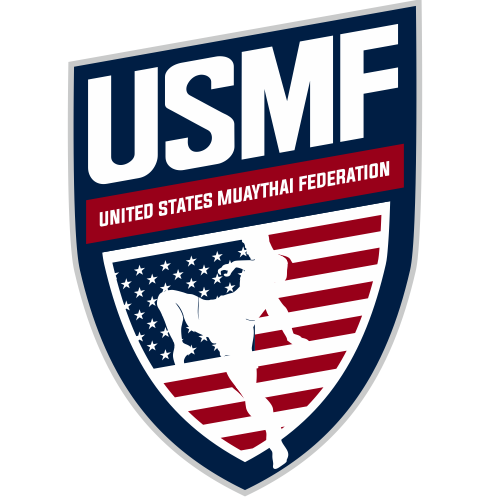